The K sound is sometimes spelt CH in words that are derived from Greek words or Greek influenced words. Words of Greek origin include school (ancient Greek σχολή), stomach (Greek στόμαχος) and echo (Greek ἠχώ). Some words like chemistry came from the Arabic al-kimiya, but were influenced by the Greek (khemeioa). However on closer investigation many other common CH words are not derived from Greek, so why use the CH spelling? The CH digraph makes three sounds the CH-sound, SH-sound and K-sound. Here we are only concerned with the CH words with the K sound. Some come from Greek and a few others are English words with Greek-style spelling mistakes. Non-Greek examples include ache (Old English acan), anchor (Old English ancor) and schooner (Scottish scon). This spelling pattern shows us some words with a CH that make a K sound, many of them are important-sounding, long, difficult-to-spell academic words, like archipelago, character and chrysanthemum. 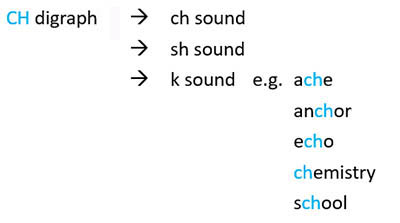 The K-sound is usually spelt with a letter K, letter C or even a CK or CH. Is it ever spelt any other way? Yes of course. The K sound also appears in the KS sound of the letter X. (link.mingpao.com/67632.htm) The K sound can also be spelt QUE or QU in words or spellings of French/Latin origin. For example the K sound is spelt QUE in the word frequent. It is from the Old French frequent and they took it from the Latin frequentem. The same historical pattern is found with the QUE words queue, sequence and question. This pattern is also found for QU words such as square, liquid and quality. Be careful, because some Old English words had their spellings changed to match the French pattern by the invading Normans. These words include the word queen (from the Old English cwen), as well as quench (from the Old English acwencan).

In addition to K and C, the K sound may be spelt CH, X, QU or QUE. So be careful with the chaotic spelling of English words.

‧Silent D Is Not Always Silent

‧PH in Suffixes and Prefixes

‧How We Got Hard And Soft Gs

‧No English words end with the letter i?

‧Long U or Long OO

‧When is Initial U Short and when is it Long?

‧Magic E and the Long U Sound

‧Pronouncing The Letter Y At The Front Of A Word

‧Pronouncing The Letter Y In The Middle Of A Word

‧Pronouncing The letter Y At The End Of A Word

‧The Last Letter is a Foreigner

‧Silent letters and why English spelling is such a mess (1): Old English

‧Silent letters and why English spelling is such a mess (2): Fake Latin

‧I Both Love and Hate Spell-Checkers

‧The Rule: I before E, except after C

A native English speaker who has been teaching practical English in Hong Kong for over two decades.

NOTE: Starting in 2016, this column has been published once every two weeks, on every other Tuesday.

General Enquiry: We welcome enquiries and feedback. Please contact us through [email protected]